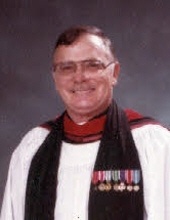 MSgt Owen Loftus (ret.) served our country for more than 20 years as both an officer (2LT), and later, a non-commissioned officer in the United States Army. He was a veteran of the Korean and Vietnam wars, and was mainly stationed at Ft. Gordon, GA, where he taught radio communications in the Signal Corps School. After retirement from the Army, Owen earned his Masters of Divinity at Erskine Seminary, and then he went on to complete a Doctorate of Ministry. He was ordained a priest, and later Bishop Emeritus, of the Anglican Church. He was also Chaplin of his local chapter of the Military Order of the Purple Heart. Owen was preceded in death by his first wife of 50 years, Katherine Szymanski Loftus, of St. Louis MO.

Visitation is scheduled for Thursday, January 14, 2021, from 2-3pm at Avinger Funeral Home, located at 2274 Eutaw Rd. Holly Hill, SC. Visitation will be followed by a graveside service with military honors at 3:30 P.M. at Holly Hill Cemetery on Holly St. Holly Hill, SC.
To order memorial trees or send flowers to the family in memory of The Very Reverend MSgt Owen Joseph Loftus, Jr., please visit our flower store.