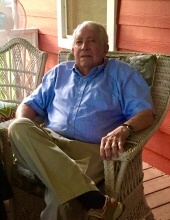 Morgan was born on December 6, 1934, in Ellaville, GA. He attended Oglethorpe High School, married Virginia Lancaster on June 7, 1956, and obtained a degree in Agricultural Engineering from the University of Georgia. Morgan was a lifelong fan of Georgia Bulldog football.

He worked for John Deere Company, owned several John Deere dealerships and other farm related businesses, and continued work in the farm industry until his retirement in 2014. Morgan and Virginia have 3 children, 3 grandchildren and 5 great grandchildren. They loved raising the family in Eutawville, SC on Lake Marion. He taught his children and many of their friends how to waterski. The family enjoyed boating with friends to various locations along the intracoastal waterway. He was active in the Swamp Fox Boat Club and Rescue Squad, serving as president for several years. He participated in various men's groups in the community, and was a member of Epiphany Episcopal Church in Eutawville where he served on the vestry.

In lieu of flowers, the family asks that donations be made to The Historic Church of Epiphany , Post Office Box 9, Eutawville, SC 29048.
To order memorial trees or send flowers to the family in memory of Robert Morgan Chapman, please visit our flower store.