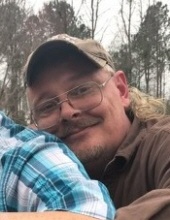 Robert Earl Jackson, 41, of Summerton, South Carolina, husband to Christina M. (Crosby) Jackson, passed from this life on Sunday, November 29, 2020 in Orangeburg, South Carolina. Robert enjoyed hunting and fishing, he had a heart of gold and believed in helping anyone in need. He was a fan of Clemson Tigers Football, he enjoyed taking a ride down a country dirt road and he enjoyed spending time with his family. He will be remembered for his southern hospitality and for his gift to bring a smile and making other laugh.

Graveside services to remember and honor Robert's life will be held at 2:00 P.M. Thursday, December 3, 2020 at the Black Creek Cemetery in Cross, South Carolina with Pastor Dale Phillips, officiating. A gathering of Robert's family and friends for a time to pay respects will be from 10:00 A.M. until 12:00 P.M on Thursday at Avinger Funeral Home, 2274 Eutaw Road in Holly Hill. Following the services, Robert will be laid to rest next to his maternal grandparents.

Funeral arrangements are under the direction of Avinger Funeral Home, 2274 Eutaw Rd., Holly Hill, SC 29059, (803) 496-3434.
To order memorial trees or send flowers to the family in memory of Robert Earl Jackson, please visit our flower store.