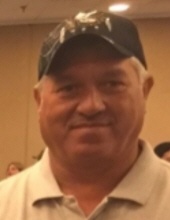 Born on July 27, 1959 in Holly Hill, South Carolina, Randy was a son of the late, Floyd Crummie and Rena Mae (Russell) Crummie.

Randy grew up in Holly Hill, he worked as a General Superintendent for M.B. Kahn in Columbia for 31 years and he was looking forward to retirement soon. Randy was also a Proud Member of the Santee Indian Tribe in which he was elected Chief. He enjoyed going fishing, playing golf and spending time with his family. He had a very likeable personality and he often enjoyed good company which involved food.

Randy is preceded in death by his parents; his brother in law, Johnny Platt and his son in law, Trey Finley. Those who will most cherish his memory are his dear wife, Margaret Crummie of Holly Hill; his daughters, Brandy Finley and Kayla Crummie both of Holly Hill; his three grandsons, Shane Crummie of Fernandina, Florida; Landon Finley and Treydon Crummie; his sisters, Beverley Pratt (Puncho) and Marie Weatherford (Andy); his brother, Clinton Crummie (Christine) all of Holly Hill. Randy is also survived by numerous nieces, nephews and members of his extended family.

Funeral services to remember and honor Randy's life will be at 1:00 P.M. on Saturday, October 30, 2021 at the Evening Light Church of God, 681 Bayview Street, Holly Hill, South Carolina 29059. Officiating will be Bro. Carl Shaffer. Rites of Committal and Interment will follow services at the Platt Family Cemetery in Holly Hill. Visitation will be from 11:00 A.M. until 1:00 P.M. Saturday at the Church.