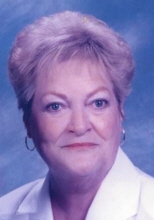 EUTAWVILLE, SC -Patsy Ann Pardue Johnson, 80, died peacefully on Tuesday, August 1, 2017 at her home in Eutawville. The family will receive friends at Avinger Funeral Home in Holly Hill on Monday, August 7, 2017 from 1:00-2:00 PM, followed by a graveside funeral service at 2:30 PM in the Eutawville Cemetery. Rev. Peter Belec will conduct the service. Patsy was born August 14, 1936, in North Wilkesboro, NC, a daughter of Andrew Carey Pardue and Rebecca M. Dowell. Patsy was the youngest of 9 children with 5 brothers and 3 sisters. Patsy graduated from Mountain View High School and went on to attend business school in Winston-Salem, NC where worked as a bookkeeper. It was during this time when she met the love of her life, Robert C. "Bobby" Johnson. Shortly after returning home from his service in the United States Navy, they were married in 1955 and inseparable until his passing in 2010. They moved to Eutawville in 1974 to enjoy the lake area. She was a member of Gen. Francis Marion's Brigade Chapter, National Society Daughters of the American Revolution, and was also an active member of Eutawville United Methodist Church for many years. Patsy's passion was her family and friends. Patsy is survived by her son, Dennis R, Johnson, USN Retired, her daughter in law, Michelle M. Johnson, and a granddaughter, Heidi Camille R. Johnson. She also leaves behind numerous nieces and nephews.

To order memorial trees or send flowers to the family in memory of Patsy P. Johnson, please visit our flower store.