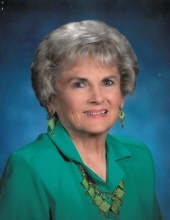 Mildred “Miss Millie” Jones Colvin, widow of M. Calhoun Colvin, of Holly Hill, SC, passed away on September 20, 2020. She was a wife, a mother, a teacher, an adventurous traveler, and a strong female role model for generations of students in her 45 years of teaching high school English at Holly Hill Academy.

“Millie” was born April 20, 1927, in Thomaston, GA, the only child of J.C. Jones, Jr. and MariClaire Zorn Jones. She grew up in Thomaston and was Valedictorian of the Class of 1944 at Robert E. Lee Institute, as well as a cheerleader all four years of high school. She always loved music and was the accompanist for several high school music
groups as well as a solo performer for clubs and recitals.

She continued her education at Agnes Scott College in Decatur, GA, with a double-major in Music and English. The summer after her high school graduation she met “Cal” Colvin, and loved him for the rest of her life. They married in 1949 and settled in Holly Hill where for 36 years she was organist and choir director of Holly Hill United Methodist Church. For 15 of those years she was Superintendent of the Children’s Department of the Sunday School and conducted the annual Vacation Bible Schools. She also taught the ladies’ Sunday School class for 30 years.

She was a charter member of the Ivy Garden Club, founded in 1949, and served three times as President of the club and many years as secretary.

In 1970 Cal and Millie were the moving spirits in the establishment of Holly Hill Academy, which Millie came to love as one of her children. She taught three of her children here. Cal was HHA’s first President (1970-1983) and when he passed away Millie was elected President, a position she has held until the present. In 2009 Millie was elected High School Teacher of the Year and went on to be one of the top three Teachers of the Year in the SC Independent School Association. The school was her pride and joy, and in addition to teaching until her retirement at 86 years old, she was also the school librarian, Guidance Counselor for College Scholars, advisor for the school newspaper, and director of the HHA Double Sextette. For several years she also taught Latin. Millie taught hundreds of high school students and each of them had a special place in her heart. She continued her work and commitment to HHA up until her death.

For five years she served on the Board of Directors of First National Bank of Holly Hill, the only woman to hold that position.

Two years after Cal’s death, Millie became a devoted partner of George M. Rooks, Jr., and they stayed together for 29 years until his death in February 2013. George enthusiastically joined Millie in her countless projects for HHA.

Millie loved to travel with both Cal and George, and she visited all seven continents, all 50 states, and approximately 65 foreign countries. As she often said, “I have had a wonderful life!”

Family and friends are invited to stop by the house on Wednesday afternoon to sign the guest register book on the front porch and leave a card or a note for the family. A small private family burial service is planned. The family invites and encourages everyone to leave an on-line condolence and share their favorite memories at www.avingerfh.com.