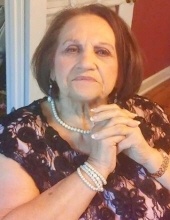 Loretta was born in Sumter to the late Martin and Lanie Ray. In addition to her parents, she is preceded in death by her siblings Beaufort Ray, Martin Ray, Jr., Floyd Ray, Josephine Ray McDonald, Melissa Ray Benehaley, and Della Ray Osborne.

Loretta was a loving wife, mother, sister, grandmother and great grandmother. She supported her husband throughout his 22 years of military service. Loretta was a member of Fellowship of Praise in Santee. She enjoyed playing board games and spending time with her grandchildren. Loretta's life was her family and she will be remembered for passionately devoting her life to them.

The family would like to thank all the caregivers during her illness and special thanks to Gloria McDowell for her loving devotion to their mother.