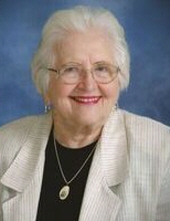 Joyce Shuler Pattishall, age 95, passed away peacefully on March 11, 2021, in Hershey, Pennsylvania. Although born as Mary Joyce Shuler, she was known by most friends and family as ‘Joyce’ or just ‘Grammie’.

Joyce was born on September 3, 1925 to Mary and Nolan Shuler in Holly Hill, SC. and was raised near there along with her older brothers, Nolan, and Lowry. After receiving a science and teaching degree from Winthrop College, she married and moved to Ann Arbor, Michigan. She later resided in North Carolina, Virginia, Ohio, and Florida. In 1966, she moved to Hershey, PA., where she became a founding member and officer of the Penn State Medical Center Faculty Wives, served as a 54-year member of Derry Presbyterian Church, and taught Science at Hershey Middle School until her retirement.

Joyce possessed an infectious sense of humor with a distinctive laugh and often exclaimed “Dear Gussie!”. She had many diverse interests, including travelling, reading, bridge, and belonged to several book groups and bridge clubs. When travelling, she always seemed to meet and befriend someone from South Carolina. Among her favorite activities were family reunions and gatherings in her home state of South Carolina, at the beach, and in the Adirondack Mountains of NY. She welcomed many into her circle of family and friends and had a unique talent of making each person feel special. To stay connected, she became an avid user of technology, and extensively emailed, Facetimed, and Zoomed when she was not talking on the phone.

The memorial will be available to be viewed at www.hooverfuneralhome.com on Wednesday, March 17 after 4PM. Private interment will be in Holly Hill, SC.
To order memorial trees or send flowers to the family in memory of Joyce Shuler Pattishall, please visit our flower store.