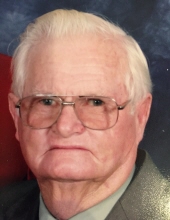 John Willie "J.W." Garrett, 84, of Cross , South Carolina entered into eternal rest on Monday, August 27, 2018. He was born on March 17, 1934 in Berkeley County, South Carolina to the late Willie and Sally (Risher) Garrett. In addition to his parents, JW was predeceased by two brothers and one sister. JW was a devoted Christian, loving husband and father. He was known as "Pappy" to all. He was a Deacon at Pressley Memorial Church for over 60 years. He will be greatly missed by his family and friends. Survivors include his spouse of 63 years, Nellie, one daughter; Linda Garrett two sons; James Garrett and Tim Garrett (Marie); seven grandchildren, seven great grandchildren; one brother, four sisters and numerous nieces and nephews. Funeral services will be held at 12 p.m. on Thursday, August 30, 2018 at Pressley Memorial Church , 1698 County Line Rd, Cross , South Carolina, 29436. The family will receive friends an hour prior to the service. Burial will follow in the church cemetery. Arrangements entrusted to Avinger Funeral Home, 2274 Eutaw Rd Holly Hill, South Carolina, 29059, 803-496-3434.
To order memorial trees or send flowers to the family in memory of John Willie "J.W." Garrett, please visit our flower store.