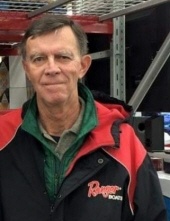 Born on October 21, 1944 in Dayton, Ohio. John was a son of the late, Lewis Garth King and Nealya Gladys (Powers) King.

John was a decorated veteran in the United States Army during the Vietnam War where he earned a Purple Heart. John later went to be a Special Agent for the United States Government with the Drug Enforcement Agency and the Federal Bureau of Investigations. John retired from Full Time Employment in the 1990's. It was during this time that he enjoyed being an avid bass fisherman. His favorite fishing spots were in Lake Okeechobee in Florida and Lake Guntersville in Alabama. John also enjoyed watching NFL and College Football.

John is preceded in death by his parents and his sister-in-law, Joanie King.
John is survived by his three daughters, Kelly Roberts (Brandon) of Oklahoma, Kendall Heathcoat (Jonathan) of Minnesota and Vanessa Reyes (Rick) of Oklahoma; three grandsons, Isaiah Roberts, Lucas Reyes and Graham Heathcoat; two granddaughters, Karalyn " Kiwi " Ryan and Lucia Heathcoat; his niece, Robin King; his nephew, Scott King and his brother, Lewis Van King of Michigan. John is also survived by his dear friends, Kirk and Gwen Renn of Santee and Donna Caughman also of Santee.

Graveside services with Military Honors will be at 10:00 A.M. Monday, October 11, 2021 at the Beaufort National Cemetery in Beaufort, South Carolina.

For those who desire memorial donations, please make a donation in memory of John to Regency Southern Care Hospice in Orangeburg, 803-403-9160 https://app.etapestry.com/onlineforms/KindredatHomeFoundationInc/KAHF.html