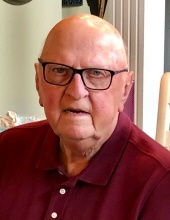 Jesse knew as a young man that he had a need for the love of Jesus, and he openly shared his salvation throughout his life. He understood that accepting Jesus as his Lord and Savior would ensure his eternal life in heaven. He would want you to know that he is now with those he loves worshiping the Lamb of God who made eternal life in heaven possible through His death on the cross. There is a distinct possibility that today, due to his overwhelming joy at being in the presence of the One who died for him, Jesse is dancing alongside his daughter Amy Catherine before the Throne of Grace.

Jesse was a member of Holly Hill United Methodist Church for many years. He will be remembered as a very hard worker, who worked diligently at his company for 43 years to build an amazing life for his family. Jesse was gentle, loyal, and honest, with an unwavering dedication to his loved ones, and he will always be remembered for the love and kindness he showed to others and his willingness to help those in need. As a young man of 21, he met Nancy, the love of his life and his soulmate. Their love story is beautiful and anyone who spent just a few moments around the couple quickly recognized a precious, perfect love between two very special people. Nancy will always affectionately refer to Jesse as “Honey.” Honey was believed by some to have been Jesse’s real name, especially after his daughter Jill filled out her elementary school enrollment forms with her dad’s name as “Honey Bilton.”

Jesse’s favorite bible verse was Psalm 23.
The Lord is my Shepherd; I shall not want. He makes me lie down in green pastures.
He leads me beside still waters. He restores my soul.
He leads me in paths of righteousness for his name’s sake.
Even though I walk through the valley of the shadow of death, I will fear no evil for you are with me; your rod and your staff, they comfort me.
You prepare a table before me in the presence of my enemies; You anoint my head with oil; my cup overflows. Surely, goodness and mercy shall follow me all the days of my life, and I shall dwell in the house of the Lord forever.

Services will be held privately by the family.

To order memorial trees or send flowers to the family in memory of Jesse B. Bilton, please visit our flower store.