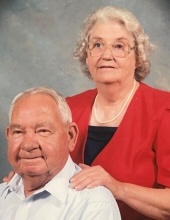 Inez Bunch, 87, of Holly Hill, entered into eternal rest on Wednesday, January 5, 2022, surrounded by her family.

Born on December 6, 1934 in Dorchester County, South Carolina, Inez was a daughter of the late, John Leon Infinger and Sadie (Huff) Infinger.

A lifelong resident of Holly Hill, Inez worked as a Seamstress in the Sewing Rooms in Holly Hill and St. George. She later worked as a Cashier for Buddy Myers and Harmon's Service Stations in Holly Hill. Inez will be remembered by her family for her love for baking and cooking, they will fondly remember her pound cakes and for spending time with her family.

Inez is preceded in death by her parents, her husband of 46 years , Joel Asbury Bunch; her daughter, Janice Chubb; her son in law, Gerald Chubb; her grandson, Travis Wayne Bunch; her great grandson, Jordan Phillips; her sister, Adeline (Johnnie) Risher and her brothers, Bobby, Frankie and Joseph Infinger.

The family will receive friends at 11:00 A.M. on Friday, January 7, 2022 at Avinger Funeral Home in Holly Hill and the services will be at 12:00 P.M. Friday in the Chapel of the Funeral Home with Pastor Travis Blackwell and Reverend Dale Phillips, officiating. Rite of Committal and Interment will follow services in the Holly Hill Pentecostal Holiness Church Cemetery where she will be laid to rest next to her husband.