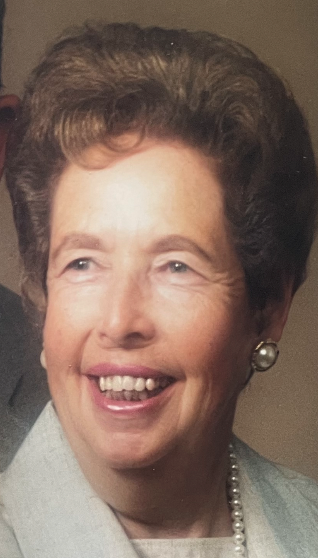 Gertrude Alma Rudd Veno, age 94, wife of Oscar Joseph Veno, Sr., died peacefully at her home in Sandridge at 9:32 on Friday evening June 10, 2022 surrounded by her devoted and loving family.

Visitation will be held Tuesday, June 14, 2022 at 11 am at Sandridge Baptist Church immediately followed by funeral services and burial at 12PM.  The service will be officiated by Pastor Owen Hill.

Mrs. Veno was born in the Sandridge Community of Berkeley County, South Carolina on March 9, 1928, a daughter of the late Estee Hilton Rudd and the late Hiram Eugene Rudd.  She attended a country school in Sandridge for the first through seventh grade. She then attended Cross High School and graduated in 1943 going directly to work at the Charleston Shipyard. She later attended Rice Business School and during World War II began working for Bell Telephone Company for 3 years while living downtown Charleston.  In January 1947 she married Oscar and made their home in Sandridge for the next 75 years which brings us to today.  She and her husband spent their many years building a strong family and successful business.  They owned O.J. Equipment Company, Inc., and she as well worked for Santee Wholesale Company in Holly Hill for 12 years. She was the Vice President of Oscar Veno & Son Inc. Logging business.  Woven throughout her daily life was her deep importance and value of God's word.  She was the oldest member of Sandridge Baptist Church and served that church and community whole heartedly on every possible board, committee and volunteer position. She always found it important in remembering from where one came and had great pride in her position as chairman of the church history room.  She did great work with the Seniors of the church "Golden Breaks" for many years. Growing up in the Great Depression years she learned many valuable lessons that she shared with her friends and family both in word and deed.  Those lessons shaped her very being and were evident throughout even the most mundane of tasks.  Those lessons made her efficient, capable and appreciative.  She enjoyed and was a master at gardening, sewing, quilting, crocheting and last but by no means least, cooking.  She was the living embodiment of the Proverbs 31 woman.

Surviving are her husband of 75 years, a dear son Joe and his wife Shirley of Pinopolis, and her loving daughters Joann Conner of Summerton, Judy Boyd (Jimmy) of St. George, and Jackie Lambert (Wayne) of Andrews. She leaves 7 grandchildren as well: Carmen Biering (Chris), Jamie Bacot, Lyndsay Veno, Haskell Connor (Tina), Chris Connor, Sommer Whisnant (Brian) and Britton Harmon. Gertrude was affectionately known as Nanna to her grands and 14 Great-grands. She leaves behind her life-long best friend's, her siblings, Miriam Brown, Mary Powell, Joyce Comfort, Joseph Rudd and Lenwood Rudd. She had many extended nieces and nephews on both her and Oscar's side of the family that loved her company and visited often. She was predeceased by her oldest sister Dorothy Carter and a son-in-law Dalton Conner.

Her pallbearers will be her male grandchildren and her great grandchildren. Her Sunday school class will sit in an honorary location during the service.  Memorial contributions may be sent to Sandridge First Baptist Church, 4677 State Rd. Ridgeville, SC 29472.

Expressions of sympathy may be viewed or submitted online at avingerfh.com/.
Funeral arrangements have been entrusted to Avinger Funeral Home, 2274 Eutaw Rd, Holly Hill, SC 29059, (803) 496-3434.

To order memorial trees or send flowers to the family in memory of Gertrude Rudd Veno, please visit our flower store.