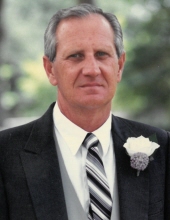 The Spirit of FRANKLIN EUGENE TAYLOR, Sr. of Cameron, after an extended illness left his earthly body to be joined with his Heavenly Father and predeceased earthly parents, Virginia Murray Taylor and Jessie Eugene Taylor on Thursday, June 27th, 2019.

"Frank" was born on February 18, 1939 and raised in Holly Hill, SC. He displayed his leadership ability even as a youth. As a high school freshman, he began the evening delivery of the Charleston Evening Post accompanied by "Nick" a local mixed breed friend and guardian dog.

An all- star athlete, Frank played both basketball and football for his high school team and was elected both "Outstanding Basketball Player" and "Most Athletic Student" in his senior year. He was also a member of the Track team, the Science club and the Student Council. Frank was a part time employee of the Farmers and Merchants Bank while in school.

Due to his accomplished youth, Frank was elected to "Boy's State," held in Columbia and sponsored by the American Legion.

As an only child, Frank was raised in a loving and close knit family, living in the family home with his parents and both sets of grandparents. He grew up as an active member of Holly Hill Baptist Church where his mother played the organ for more than fifty years.

After graduation, Frank attended Western Carolina University on a basketball scholarship before transferring to the University of South Carolina and then joined the United States Army.

Initially employed by Owen Steel Company, Inc., Frank was appointed by the United States Secretary of Commerce to serve as a member of the South Carolina District Export Council. Later, he moved forward to establish Taylor Architectural Metals in Columbia, from which he retired from in 2010.

A memorial service for Mr. Taylor will be held at Avinger Funeral Home, 2274 Eutaw Road, Holly Hill on Saturday, June 29th at 2 p,m. The family will receive friends following the memorial service.

The family expresses profound appreciation to Frank's loving caretaker, Mr. Daniel Dewey as well as to Ms. Louise Toole and the devoted members of the Grove Park Hospice team from Orangeburg.

In lieu of flowers, memorials may be made to the Grove Park Hospice Group or to the Cancer Center of your choice.
To order memorial trees or send flowers to the family in memory of Franklin Eugene Taylor, Sr. , please visit our flower store.