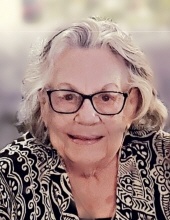 Frances Marian Jones Bowers Geiter, named for her Grandfather Francis Marion Soar who was named after the Revolutionary War “Swamp Fox”, passed on to glory on August 22, 2021.

Born on February 19, 1933, in Louisville, KY, she experienced a full and rich life. Not a stranger to life’s difficulties, she was preceded in death by husband, Emory Bowers and their two sons, Jim and Brian; her beloved granddaughter, Candice Nowak, her second husband Richard Geiter, and her brother, Charles. Even through these trials, she remained positive as she continued to trust and look toward her Savior, Jesus Christ.

A graduate of Stetson University in Deland, FL, Frances began her teaching career in Bel Glade, FL with her husband, Emory Bowers, in his career as a High School Football Coach and Math Teacher. As an Educator, she specialized in working with children with speech difficulty. She also was heavily involved with Christian education working in young girls’ ministries. A lifelong student, Frances spent most of her free time continuing her education, receiving a Masters Degree at USC and becoming a Doctoral Candidate. Moving to Elloree, South Carolina, she remained an Educator for the remainder of her working years.

Years past the death of Emory, Frances married Richard Geiter and together they enjoyed many years of traveling the world while they made their home in Santee, SC. Her love for travel grew from her young life as a dependent to her father who served in WWII and Korea as a Chaplain. Living with her family in Berlin and Munich Germany immediately after WWII fostered her desire to travel. The Geiter home, on the edge of Santee National Park, served as a home base for them for years. After Dick’s death, she continued to live in Santee, but as her health declined, she moved to Mount Pleasant, SC where she lived for a number of years with her good friend, Judy Fuquay.

Frances is survived by her daughter-in-law Michelle Bowers, grandson Jamison Bowers (15), great-grandson Jaycee Bowers (14), great-granddaughter Jessa Nowak (8), oldest brother, Reed Newell; the youngest Stephen; her sister, Lavinia Griffin and numerous nephews and nieces. We would like to express our utmost appreciation to Judy Fuquay, Sharon Fries, Stacy Miers, Amanda Aprile and their families for including Nana in your family. You shared so much love and gave her three “honorary” grandchildren, Jackson Aprile, Mason Aprile, and Turner Aprile.