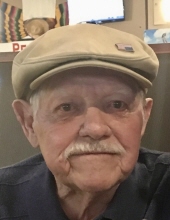 Eugene Fagan, 91, of Santee, SC, passed away peacefully at home on February 2, 2022 surrounded by love and care. The son of Eugene and Helen Fagan, Gene was born on June 29, 1930. He was lucky to be born the identical twin of Bob, giving him a best friend for life from Day 1.

Gene showed leadership skills early on, acting as President of his high school class and captain of his baseball, football and basketball teams. Gene entered the U.S. Navy in 1951, where he traveled the world aboard the U.S.S. Coral Sea, serving as an Aviation Structural Mechanic. He spent the majority of his professional life advancing through the ranks at Allstate Insurance Company in the Property Claims division.

Upon his retirement in 1995, Gene pursued his retirement dreams of golf, golf, and more golf. He and his wife Joan moved to Santee, SC, joining Bob and Bob’s wife Joy. Their sister Helen would soon follow. The three siblings enjoyed sharing their retirement years together. Most importantly, the twins were back together and were a dynamic duo on the golf course. One of Gene’s proudest accomplishments in those years was winning the club championship at his Santee Cooper resort. All of them enjoyed many a wingding too.

Gene was predeceased by his wife Joan, his brother Bob, and his sister Helen. He was also predeceased by his former wife, Bobbie Fagan. Gene is survived by 3 daughters: Sue Chichester and her husband Bill of Mount Morris, NY; Barb Aubin and her husband Chris of West Simsbury, CT; and Kathy Fagan and her husband David Sturgeon of Moraga, CA. Gene also leaves behind 11 grandchildren: Chris, Debbie, Jessica, Tim, Lindsay, Nicholas, Alex, Elizabeth, Hayley, Harrison and Andrew, and 3 great-grandchildren: Maeve, Jack and Miya. He is survived by his sister-in-law, Joy Fagan, who provided care and companionship.

Gene’s daughters would like to thank Homestead Hospice for their care over the past few years. They would also like to give a special thanks to Kimberly Long, who made their father’s last months as comfortable and happy as possible. Kim spent many an hour watching Westerns with Gene, which was, after all, his favorite thing to do once his golfing days ended.

The family will have a private memorial.