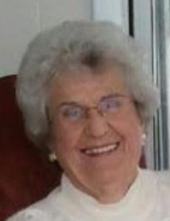 EUTAWVILLE- Ethel Rousso Courtney, 89, of Eutawville, S.C., widow of James Edward Courtney, entered her eternal home on Monday, February 26. Mrs. Courtney, born on July 14, 1928 in Charleston, was the seventh of nine children born to first-generation Greek immigrants John M. and Eleni Y. Rousso. Mrs. Courtney had an unwavering faith in God and lived a life serving her Lord through faith, family, friends, and her church, the First Baptist Church of Holly Hill, where she used her God given talents in any opportunity for service. Among many varied positions she held within the church, she was the first woman to serve as Chairman of the Board of Deacons. Her earthly tasks as wife, mother, and Gam were roles that she treasured. Mrs. Courtney's grandchildren, great-grandchildren and their friends called her "Gam." Her Rousso family called her "Lackie." Her children called her "Mama" and knew her as their best friend. Her late husband called her "Hon." On Monday, the Lord called her home. In addition to her parents and her husband of 62 years, she was preceded in death by her brother Costa Rousso; sisters Carrie Sneed, Stella Rousso, Maggie Shafer and Mary Webb; and son-in-law Drew Geoly. She is survived by her three children Babs Geoly of Greenwood, Gail (John) Brubaker of Awendaw and Jamie (Tenley) Courtney of Eutawville; four grandchildren, Stephen (Julie) Geoly of Greenwood, Shannon Geoly of Wilmington, N.C., Trey Courtney and Dallas Courtney, both of Eutawville; and five great-grandchildren, Ele, Anna Grace, Drew, and McCutchen Geoly and Connley Belle Courtney; sisters Anna Utsey, Annette Huguley and Stephanie King; and many nieces and nephews. Mrs. Courtney's celebration of life and resurrection service will be held on Friday, March 2 at 2:00pm at the First Baptist Church of Holly Hill with Rev. Buddy Locke, Rev. Earl Behr, and Rev. Jim Parnell officiating. Burial will be in the Holly Hill Cemetery. Visitation will be from 12:30 - 2:00 in the church social hall. Pallbearers will be Stephen Geoly, Trey Courtney, Dallas Courtney, John Brubaker, Tommy Easters, and Barney Atkinson and honorary Pallbearers will be her nephews. Memorials may be made to the First Baptist Church, P.O. Box 235, Holly Hill, S.C. 29059 or Holly Hill Cemetery Fund, P.O. Box 203, Holly Hill S.C. 29059. www.avingerfh.com
To order memorial trees or send flowers to the family in memory of Ethel Rousso Courtney, please visit our flower store.