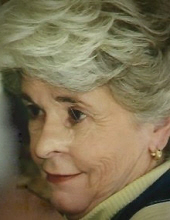 Ermine Floyd Matheny of Holly Hill, wife of the late John William "Billy" Matheny, passed away on Sunday, March 17, 2019 at the Tallahassee home of her brother, Carlisle Floyd. She was born in Latta, SC, and was a proud South Carolinian for 91 years. Because her parents, Rev. C.S. Floyd and Ida Fenegan Floyd,were Methodist ministers, she grew up in many of the state’s small towns—McClellanville, Bethune, and North. When the family arrived at the Holly Hill Methodist Church in 1943, Ermine had found her home.

After graduating from Holly Hill High, she attended Converse College where she studied voice, became student body president and graduated with honors. Shortly afterwards, She married Billy Matheny, and they were both active members in every facet of the Holly Hill community. Once her children were older, she began her career as a classroom teacher at Holly Hill High School. Her students learned Civics, Government and History from her in ways that many say they have never forgotten. In 1976, she retired from teaching briefly, but soon decided to go back to the classroom. She began teaching again part time at the Holly Hill Academy. After retiring from the Academy, she taught adult literacy to workers from the local mills and found great satisfaction with her older students.

Ermine was also active in garden club, high school sports, and the Methodist church. Her beautiful alto voice graced many weddings, church services and choirs. The memory of that voice lingers with everyone who ever heard it. With her brother, composer Carlisle Floyd, she attended performances at the Kennedy Center Honors for many years. In that role, she met 5 Presidents, Queen Elizabeth and Prince Phillip. Because of her genuine heart and interest in people, she never met a stranger. She was as gracious to the clerks at her beloved TJMaxx as to the queen of England.

The family was always her first priority. Her love of all children extended not only to her own girls, grandbabies and great grands, but to their friends as well. After family, travel was her first love. She was always ready to go anywhere, anytime. She travelled extensively, sometimes taking groups of students on educational trips through Europe and the US. She loved to fly and had dreams of flying all her life. For her 80th birthday, she was given flying lessons.

A Memorial service for “Miss” Ermine Matheny will be held at the Holly Hill United Methodist Church at 2:30pm on Sunday, March 31, 2019. Burial will be private. The family will receive friends at the church social hall after the service.