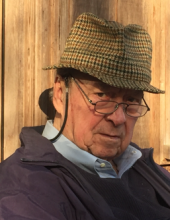 JAMES WALTER HUTTO DVM
Dr. James Walter Hutto, 87, of Holly Hill, a beloved father, veterinarian and friend, died May 7, 2018. He was born on April 19, 1931 in Charleston, S. C. and grew up to the Providence Community where the Hutto family has farmed for over 225 years. He was the son of the late O’Dean W. Hutto Sr. and Pearl Barry Hutto. He, his two brothers and his five first-cousins grew up together, and their close relationship instilled in him the great love of family that he never outgrew.
He graduated from Providence High School and attended The Citadel before transferring to Clemson University. In 1951, he was accepted into the School of Veterinary Medicine at the University of Georgia. After graduation, he was commissioned as an officer in the U.S. Air Force and served between 1956-1959. Before he moved to his first assignment in England, he married Doris (Dollsie) Bryant Davis of Orangeburg. They were able to do extensive traveling while they were stationed there, and their first daughter was born in England.
After returning to the United States, their three younger children were born. He began his practice in the Holly Hill area with the late Dr. Sam Galphin. Later, he established his own practice on the outskirts of town, where he continued to work for 57 years, until two weeks ago.
In his first years as a veterinarian, he traveled from farm to farm to take care of large animals. He served as the vet for Hutto Stock Yard. In his later years, his concentration was more on small animals. He was able to continue practicing with the help of his loyal assistant and friend, William Young.
In addition to his home in Holly Hill, he and Dollsie designed and built a lake house on Lake Marion, using timbers and bricks he salvaged from historic buildings. Their primary joy came from sharing this home with family and friends.
Dr. Hutto is survived by two daughters, Doris Bryant Hutto King and her husband William Eugene (Gene) King, III of the lake area of Eutawville and Lillian Ray Hutto and her husband, Charlie Smith of Holly Hill; three grandchildren, Doris Bryant King Korth and husband Kevin Korth of Atlanta, Ga., James Walter Hutto, III and Camilla Anne Hutto along with their mother, Ashlyn Mulherin Hutto of Augusta, Ga.; one brother, John Laurence Hutto of Holly Hill and nephews, Barry Hutto of Providence, Bryan Hutto of St. George, Laurence Hutto of Mt. Pleasant and Tom Hutto of Holly Hill.
He was predeceased by his wife, Doris (Dollsie) Davis Hutto as well as two of their children, Camilla Barry Hutto and James Walter Hutto, Jr. He was also predeceased by his older brother and his wife, O’Dean W. Hutto, Jr. and Harriet Ann Way Hutto, and sister-in-law, Eddie Stroman Hutto.
Walter was raised in St. Ann Catholic Church in Holly Hill. His services will be held 11:00 a.m. Friday morning, May 11, 2018 at Providence United Methodist Church, 4833 Old State Road (Providence Community), Holly Hill, S.C., the church of his ancestors. Rev. Terry Martin and Father John Scott officiating. Burial will follow in the Holly Hill cemetery with closing Catholic prayers at the graveside.
Family and friends will be received from 6:00-8:00 on Thursday evening, May 10 at Avinger Funeral Home, 2274 Eutaw Road, Holly Hill, S.C.
Memorials may be made to The Mesothelioma Applied Research Foundation, 1317 King Street, Alexandria, Va. 22314.
To order memorial trees or send flowers to the family in memory of Dr James Walter Hutto, please visit our flower store.