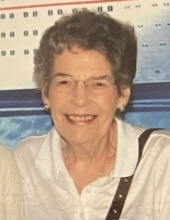 Born on October 25, 1924 in Camden, New Jersey, Dorothy was a daughter of the late Thomas Arthur Johnson and Mable Macomber Johnson.

Dorothy was an accomplished seamstress and quilter, she won several awards in competition at the South Carolina State Fair and in other entries as well. Dorothy was also active in the Lake Marion Piecemakers Quilt Guild in the area and enjoyed time pursuing this passion. Dorothy worked for J. E. Baker Company of York, Pennsylvania where she was a supervisor in their brick manufacturing division. She also enjoyed Square Dancing, Golf, Tennis and spending time with her family. Dorothy was a very conscientious homemaker, she had a very devoted love to her children and she persevered through many difficult times during her life. Locally she was known as very social and willing to share her skills with those wishing to learn.

Dorothy is the widow of the late Arthur Haines of Santee, SC, York and Greater Philadelphia in Pennsylvania. Dorothy is also preceded in death by her parents and grandson, Marc Stocker. Those who will most cherish her memory are her daughter, Dorothy Thompson and her husband, Robert of Lancaster, Pennsylvania; her son, John Stocker of Old Bridge, New Jersey and her great granddaughter, Kearston McQuiggan and her husband, Tom of York, Pennsylvania;

Services to remember and honor Dorothy's life will be at 2:00 P.M. Wednesday, February 2, 2022 in the Chapel of Avinger Funeral Home in Holly Hill. A gathering of family and friends for a time of reflection will be from 1:00 P.M. until service time at the funeral home. Dorothy will then be sent to York, Pennsylvania for services there, where she would then be laid to rest next to her husband in the Dallastown Union Cemetery in York.

In lieu of flowers, memorial contributions in Dorothy`s memory may be sent to the American Cancer Society or the SPCA.