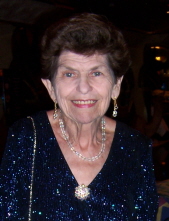 Clara Sue Howe, of Charleston, SC., wife of the late Thomas K. Howe, entered into eternal rest on October 27, 2020. She was 87 years old.
Born on February 7th 1933, in Barnwell, SC., Clara Sue was the daughter of the late Dallis Clifford Jones and Rose Ann Vernon Owens Jones. She grew up in Barnwell, South Carolina.

As the wife of a Naval Officer, she lived in Naples, Italy for several years, and traveled extensively through Western Europe. She also traveled to Greece, Scotland, Ireland, Mexico and Canada. She rode the famous Orient Express through part of France, and kissed the Blarney Stone in Ireland. Sue was a resident of the Eutawville, SC. community for over 40 years. She was a Founding Member of the Presbyterian Church in Santee, SC. and served in various positions in the church. She was also a certified EMT and volunteered with the Holly Hill SC. Rescue Squad for five years. Sue was a member of various clubs, including the Boat Club, Holly Hill Garden Club, Holly Hill Little Theater and the Red Hat Society. She participated with the V.F.W., Lions Club, and the Sojourners and Shriners Organizations of Charleston. She loved Sailing, crossword puzzles, drawing and painting.

In addition to being a loving wife and mother, Clara Sue lived a full and adventurous life. She raced a 1965 Mustang at the Virginia Beach and Suffolk Drag ways during the late 1960s. She raced against men before there were Powderpuff events. She also took motorcycle trips with her husband while in Italy. While traveling in the family motorhome for six months, Sue visited most of the states throughout the United States.
Later in life, she traveled to the Holy Land and Egypt with Church groups, and later visited China and the Great Wall. Even in her late 70s she traveled alone to Alaska and also was a crew member for a week on the Grace Bailey Sailing Yacht in New England.

Sue is survived by her two daughters, Kathryn Howe Fletcher, and her husband Len, and Deborah Howe O’Shea, and her husband Michael; and her two sons, Tom Howe and his wife Dana, and John Howe and his wife Kathy.
Sue loved her family and is blessed by a large legacy of 14 Grandchildren and 28 Great-Grandchildren. Sue was very sweet and kind and would do anything for you and was dearly loved by all who knew her.

The family will receive friends on Saturday, October 31, from 2:00 pm - 3:30 pm at Avinger Funeral Home in Holly Hill, SC. A Family Memorial Service will be held from 3:30 pm – 4:00 pm. Internment will immediately follow at Holly Gardens in Holly Hill, SC.

Expressions of sympathy may be viewed or submitted online at https://www.avingerfh.com.