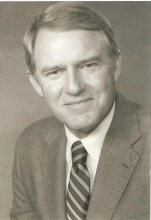 MT. PLEASANT, SC - Charles H. 'Charlie' Hughes was born in Eutawville, SC to George H. and Edna Croft Hughes on February 23, 1939. He attended schools in Eutawville and Holly Hill as well as the University of South Carolina. He attended the South Carolina Banker's School and the School of Banking of the South in Louisiana. He joined CS National Bank in 1960 in Columbia, SC and retired with Bank of America in 1999. He served as Senior Vice President and Regional Executive with responsibilities for banking centers in Sumter, Hartsville, Camden, Florence, Conway, Georgetown, Myrtle Beach, and Aiken, South Carolina. He and his wife Sara lived in Columbia, Sumter, Myrtle Beach, Aiken, and Orangeburg during his banking career. Charlie selflessly served his community as a Rotarian for over 43 years. In Orangeburg he served as Secretary and Board member. He was a member of the Myrtle Beach Rotary Club and Charter President of the Chicora Rotary Club in Myrtle Beach. He was also a member of the Sumter, Manning, and Aiken Rotary Clubs and was a Paul Harris Fellow. His other civic involvements included President of the Sumter Jaycees, President of the Orangeburg Chamber of Commerce, Executive Board Member of the Myrtle Beach Chamber and President of the Aiken Chamber of Commerce. He served on Vestry in Episcopal Churches in Aiken, Sumter, and Summerton, SC. Charliegreatly enjoyed meeting people and serving as was so evident throughout his banking career. He never met a stranger and was known for his special smile. He embraced and celebrated life and will be missed by us all. Charliewas married 57 years to and is survived by the former Sara Nell Phillips of Marion, SC; Children, Charles (Chuck) H. Hughes, Jr and his wife, Cheryl Graves Hughes of Mt. Pleasant, SC Cheryl Hughes Ward and her husband, Stephen Ray Ward also of Mt. Pleasant, SC; Grandchildren, Sarah Elizabeth Thie and her husband, Douglas, Charles Taylor Hughes, Harrison Croft Hughes, Samuel Raymond Ward, Hannah Lane Ward. A memorial graveside service will be held at 1:00 PM on Saturday, August 26, 2017 at the Eutawville Cemetery. A memorial service was held on Monday, July 31 at 11:30 am in the Rodenberg Chapel at Franke at Seaside, 1885 Rifle Range Road, Mt. Pleasant, SC. In lieu of flowers, the family requests donations to Respite Care of Charleston, 1605 Harbor View Rd, Charleston, SC, 29412.

To order memorial trees or send flowers to the family in memory of Charles H. Hughes, please visit our flower store.