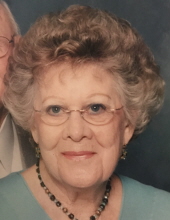 She was born September 13, 1925 to Thelma Bull Lindstedt Williams and William W. Bull. Her father, William, drowned 3 weeks before she was born, and she was raised by her loving step-father, George Lindstedt, Sr. She lived most of her life in her beloved town of Holly Hill but in recent years had been living in an assisted living facility in Columbia near her three daughters. She was a lifelong member of Holly Hill United Methodist Church where she occasionally played the piano and was a member of the Lillian Colvin Circle. She had also been the organist for a few years for Emmanuel Baptist Church in Holly Hill. She was a member of the Holly Hill Music Club, and had been the pianist for The Beacons, the young Christian group that she and Rinehart sponsored. She was a behind-the-scenes participant in various town activities. Billie was quite the southern lady and never went anywhere without being stylishly dressed and her hair perfectly coiffed. She was so meticulous about her hair that she dared anyone to touch it and would even nap in the car or her favorite rocker sitting straight up so as not to mess it up! She was indeed the best cook around according to her family and friends and could go into the kitchen when an unplanned visitor may stop by and she would rustle up the best "spoon rations" with no planning. Afterwards, you would leave the table having had the best feast! Rinehart called her "B" but she would become known as "the Bee" and even "the Queen Bee" and would occasionally "get her stinger out" if she got miffed with you about something. You would then want to steer clear for a bit lest you get stung! She loved having family around and especially her girls and that big baby boy of hers! When they'd all get together and she would make her famous bread pudding nothing would do without that baby boy getting the first bite. She played her piano often and many times when family was visiting, they'd be around the piano listening or singing some of those old southern gospel songs she loved so much. She and Rinehart spent many weekends in their younger years tromping all over the southeast attending huge gospel singings. They also enjoyed a few years of square dancing with the Dorchester Ramblers and would travel near and far on weekends dancing to the music with their matching outfits swirling and twirling to the sounds of the caller. Billie loved her family so much and loved having them visit that it was not uncommon to have 3 or 4 pallets on the living room floor to accommodate all the family that had come to stay for the weekend. It didn't bother her and Rinehart one bit to have that huge crowd with them. They spent a week or two at the beach every year and Billie could always be found sunning herself until lunchtime when she would set out for the house to begin watching her afternoon of soaps. Her family loved her and Rinehart so much they just couldn't stay away but as time passed, they began to have family gatherings at their children's homes to take the pressure off and allow them to enjoy being cooked for and cared for themselves.

A Celebration of Life service will be held at the Holly Hill United Methodist Church and will be announced at a future date. Memorials may be made to Beginnings SC, 437 Center Street, West Columbia, SC 29169 or Lighthouse Hospice Group, 110 Oak Park Drive, Irmo, SC 29063.

In lieu of flowers, memorial contributions in Billie's memory may be made to Holly Hill United Methodist Church.
To order memorial trees or send flowers to the family in memory of Billie Bull Chewning , please visit our flower store.