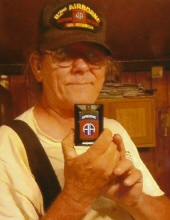 Allen Infinger, age 63, of Holly Hill , South Carolina died, Tuesday, June 12, 2018 at his residence. He was born on September 27, 1954 in Charleston, SC to John and Melissa Infinger. He enjoyed fishing, riding his motor cycle, building and working on projects. Past Post Commander of American Legion, of Holly Hill, SC. He is an honorary member of the Santee Indian Tribe of Holly Hill, SC. He served his country in the 82nd Airborne Division, United States Army.

Expressions of sympathy may be viewed or submitted to www.avingerfh.com.
Arrangements entrusted to Avinger Funeral Home, 2274 Eutaw Rd Holly Hill, South Carolina, 29059, 803-496-3434.
To order memorial trees or send flowers to the family in memory of Allen Infinger, please visit our flower store.