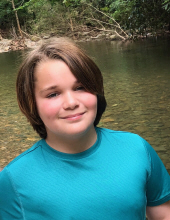 Born August 31st, 2006, Wyatt instantly became the true light of Spencer and Wendy (Atkinson) Hutto’s lives. Being a sincerely kind and sweet boy, he never met a stranger, and was always willing and ready to be someone’s friend. Whether being creative with technology/electronics, or having and caring for animals, once Wyatt decided he was interested in something, it became a passion. That’s what he was from the very beginning: a passionate soul. But above all else, Wyatt loved his family and friends; from his parents and grandparents, to his aunts, uncles, and cousins, there wasn’t a single thing that he wouldn’t give or do to make sure they knew how much he loved them.

Wyatt was preceded in death by his grandmother Elizabeth “Buffie” Hutto and his cousin Zackary Getsinger.

A Celebration of his life will be held on Saturday, February 2nd, 2019 at 11AM, at Fellowship of Praise, 8280 Old Number Six Hwy., Santee, SC 29142. The family will receive friends following the service.

Arrangements have been entrusted to Avinger Funeral Home in Holly Hill, SC. Flowers may be sent or donations may be made to Sharing Hope SC at www.sharinghopesc.org.
To order memorial trees or send flowers to the family in memory of Wyatt Hutto, please visit our flower store.