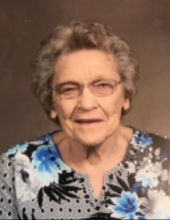 Born on January 17, 1928 in Dorchester, South Carolina, Norma was a daughter of the late Barney McKinley Stephens and Mattie Traxler Stephens. Norma graduated from Ridgeville High School and on April 20, 1953 she married Earl Eugene West, Jr. where she then went on to become a loving wife, mother, grandmother and great grandmother. She enjoyed spending time with all of her family and friends. During her early years before her health declined, Norma was an active participant as a member of the Providence United Methodist Church and its United Methodist Women's missionary group.

In lieu of flowers, memorial contributions in Norma`s memory may be sent to the Providence United Methodist Church, in care of Frankie Dantzler, 2988 Bass Drive Santee, SC 29142

Funeral arrangements are under the direction of Avinger Funeral Home, 2274 Eutaw Rd., Holly Hill, SC 29059, (803) 496-3434.
To order memorial trees or send flowers to the family in memory of Norma Stephens West, please visit our flower store.