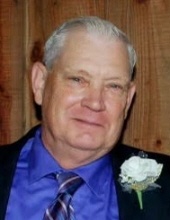 Aubrey Glenn Jones, 78, of Santee, SC, went to be with his Lord and Saviour Jesus Christ on Friday, October 8, 2021.
Born July 21, 1943, he was the son of the late Thomas Bair Jones and Mamie Wiles Jones. He was a master mechanic with many God given talents.

Aubrey was a charter member of Santee Bible Baptist Church and the Santee Fire Department. He was in the US Army and served in Vietnam. Aubrey was a man of strong faith and served as a deacon for many years.

Services will be held Wednesday, October 13, 2021,12PM at Santee Bible Baptist Church. Visitation will be held one hour prior to the service at 11AM. Burial with Military Honors will follow at the Hungerpiller Cemetery in Elloree, SC.

Memorials in Aubrey’s memory can be made to Santee Bible Baptist Church or the Alzheimer’s Association.
Expressions of sympathy may be viewed or submitted online at https://www.avingerfh.com/.